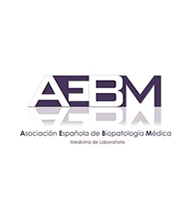 Pictures 1 and 2 show a well of a plate indirect immunofluorescence (IIF) of Hep-2000® cells with a 1/2560 speckled pattern corresponding to anti-SSA/Ro (Ro60+Ro52) and anti-SSB/La antibody (lat-er demonstrated by immunoblotting in the picture 3).

Hep-2000® cells are squamous cell carcinoma of human esophagus which have been transfected with cDNA encoding the antigen SSA/Ro 60 KDa, thus conferring greater antigenic expression that increases specificity and sensitivity for the determination of these autoantibodies. 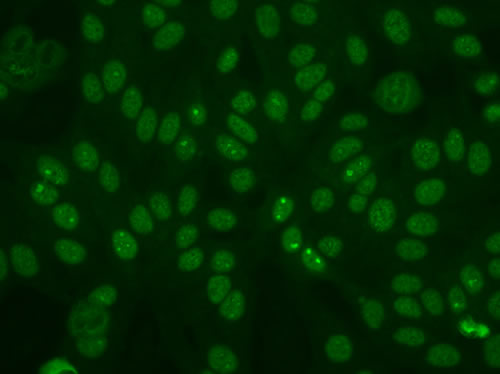 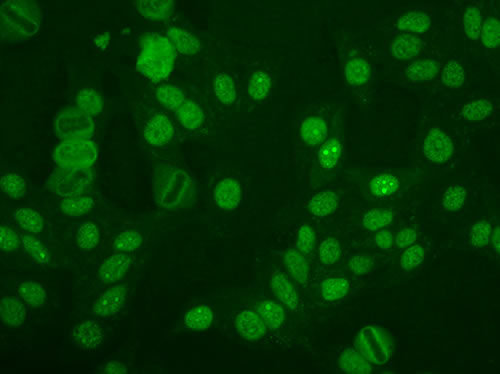 Figure 2. Same pattern as in the previous picture, where better appreciate the negative metaphases.
Sample corresponds to a 51-year-old cleaner profession, smoking one pack/day, no drug allergies or known metabolic disorders, who comes to consulting your primary care physician referring populous lesions, winy red, in both lower extremities, from about a year ago. They are self-limited injuries, about 3-4 days duration and recurring. Further relates edemas in the lower limbs that are not objectified in exploration. She reported loss of weight and hair. There is no photographic reference of injuries patient.

Figure 3. Immunoblot where positivity is evidence for the autoantibodies anti-SSA/Ro52, anti SSA/Ro60 y anti SSB/La.
In the analytical requested by your primary care physician only highlights a rheumatoid factor >500 IU/mL (0-15), and therefore requests the rheumatology service assessment, which completes  studies. No signs of joint inflammation or other systemic symptoms in outbreaks. After the anamnesis, physical examination and results of antinuclear antibodies (ANA), was diagnosed with Sjögren's syndrome.

Sjogren's Syndrome, a disease described in 1930 by the Swedish ophthalmologist Henrik Sjögren1, is a chronic autoimmune exocrinopathy, characterized by an infiltration of T lymphocytes in the affect glands and systemic activation of B lymphocytes have a slow progression and an unknown etiology.

It affects 0.5-3% of the population, mostly middle-aged women, although it can occur at any age2. Evolves very slowly lapsing more than 10 years between the onset of symptoms and full development.

It is considered as primary SS (pSS) if it appears in isolation and secondary if it occurs associated with other autoimmune diseases such as systemic lupus erythematosus or rheumatoid arthritis.

The cause is unknown. They have been described several possible triggers as environmental (viral infections) and hormone (estrogen, androgen deficiency), which would result in genetically susceptible subjects, in an inadequate response to certain exocrine glandular epithelium members as the Ro and La ribonucleoproteins. pSS patients often have antibodies to SSA/Ro or SSB/La, and many patients have both at once. The frequency of anti-SSA/Ro and/or anti-SSB/La varies between studies, but usually 60 to 80 percent of patients with pSS have one or both of these autoantibodies. The study of SSA/Ro revealed that consists of two different antigens, one of 60 kDa and other of 52 kDa3. pSS patients may develop autoantibodies to either or both antigens4.

It is mainly characterized by dryness of the oral mucosa (xerostomia) and eye (xerophthalmia), although it can often produce symptoms nasal dryness, skin or vaginal. However, the inflammatory reaction can affect systemically to various organs and cause extraglandular manifestations. The extraglandular manifestations are diverse and sometimes can be the presentation of the disease as in this case. The most common are arthralgia (65 %), Raynaud's phenomenon (40 %), lymphadenopathy (20 %) and pleuropulmonary, kidney or liver disorders with about 10 % each one. There are less frequent manifestations such as vasculitis, peripheral neuropathies, lymphomas, splenomegaly or myositis.

Regarding laboratory data, it may appear an elevated erythrocyte sedimentation rate in 60-90% of cases and gamma-glutamyltranferase, C-reactive protein (5%), leukopenia, thrombocytopenia, anemia, increased transaminases or alkaline phosphatase. More specific data are positive ANA that appear in 90 % of cases, anti-SSA/Ro (55%) or anti-SSB/La (40%) and elevation FR (60-90 %).